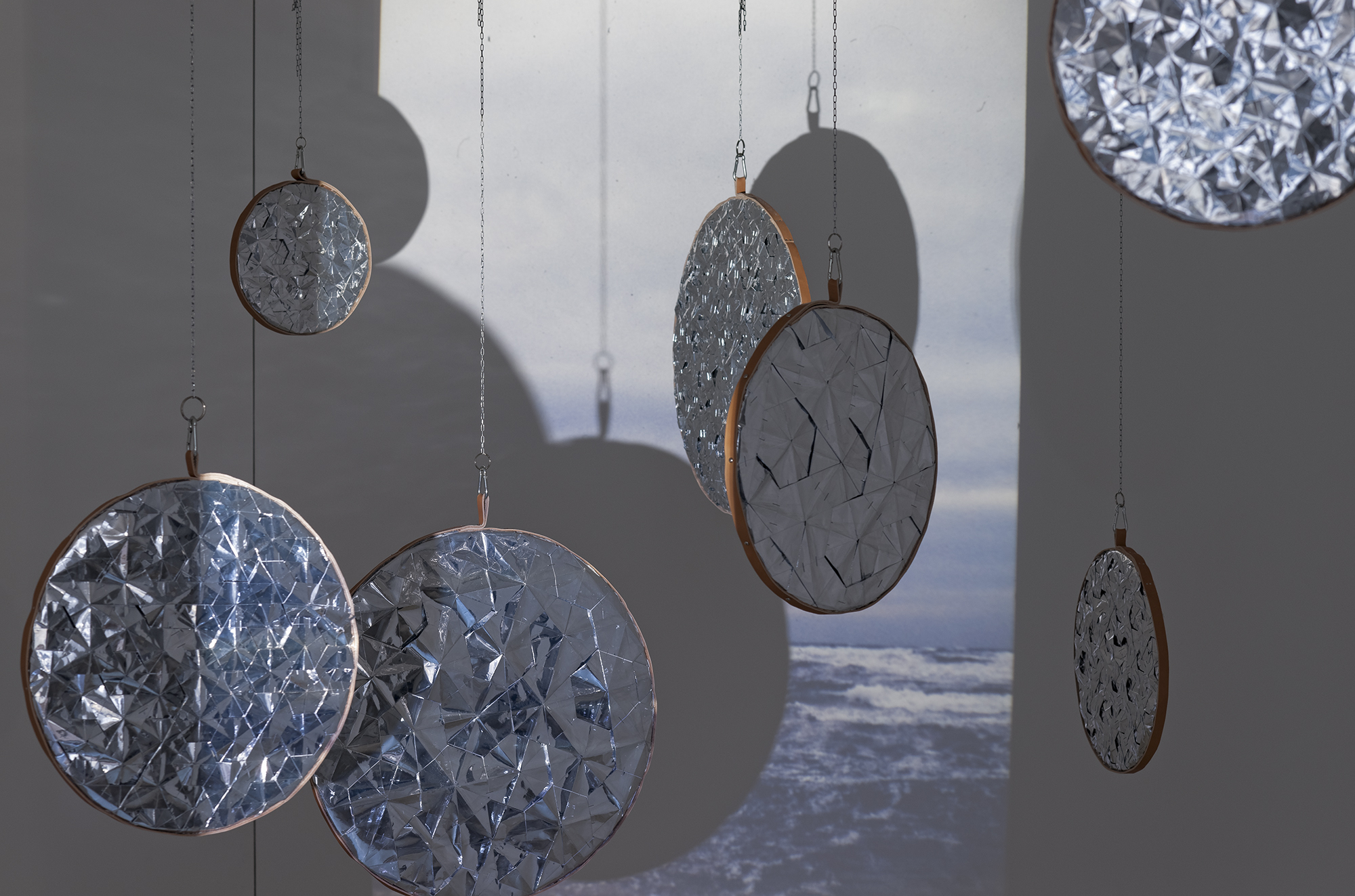 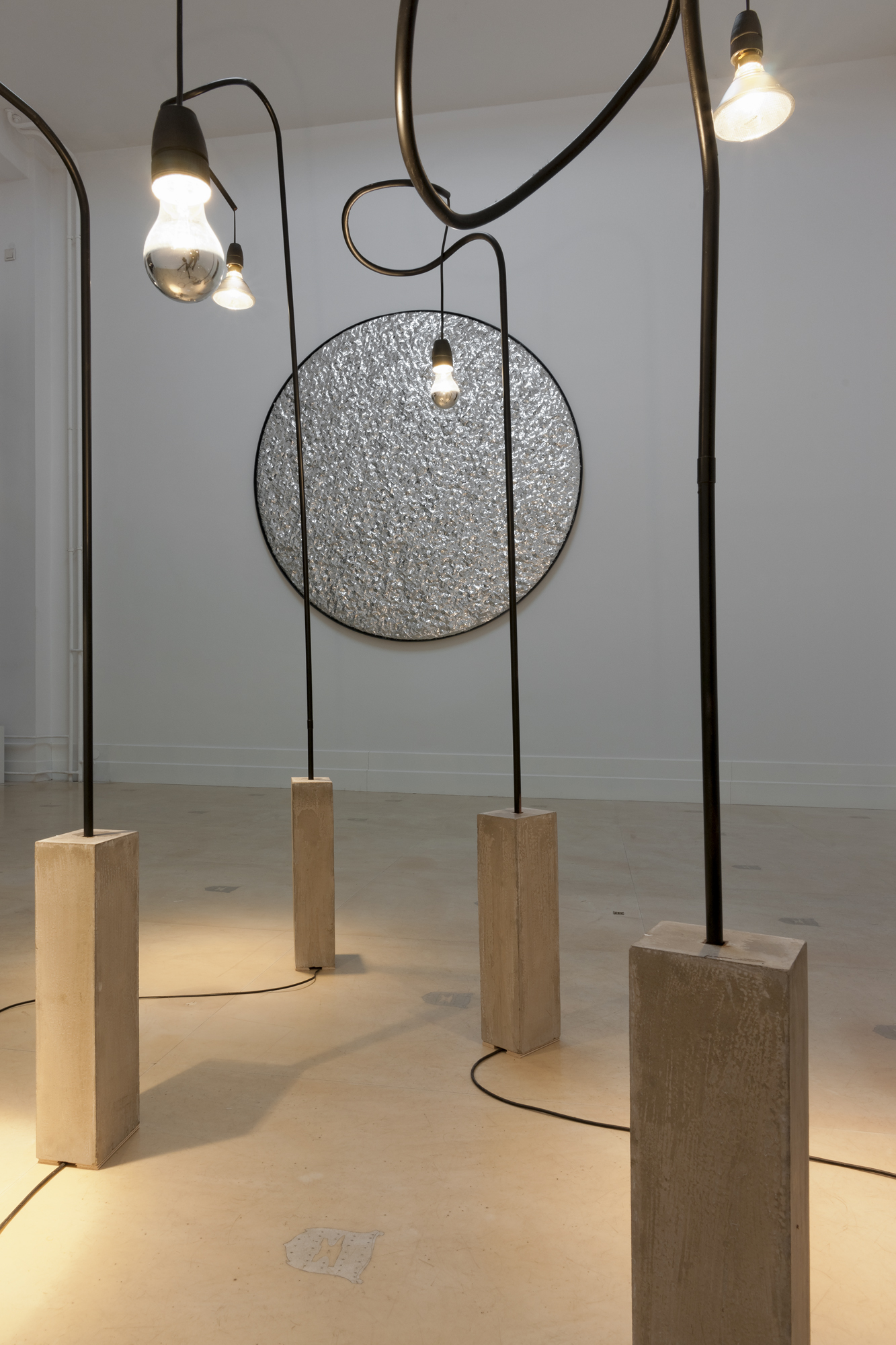 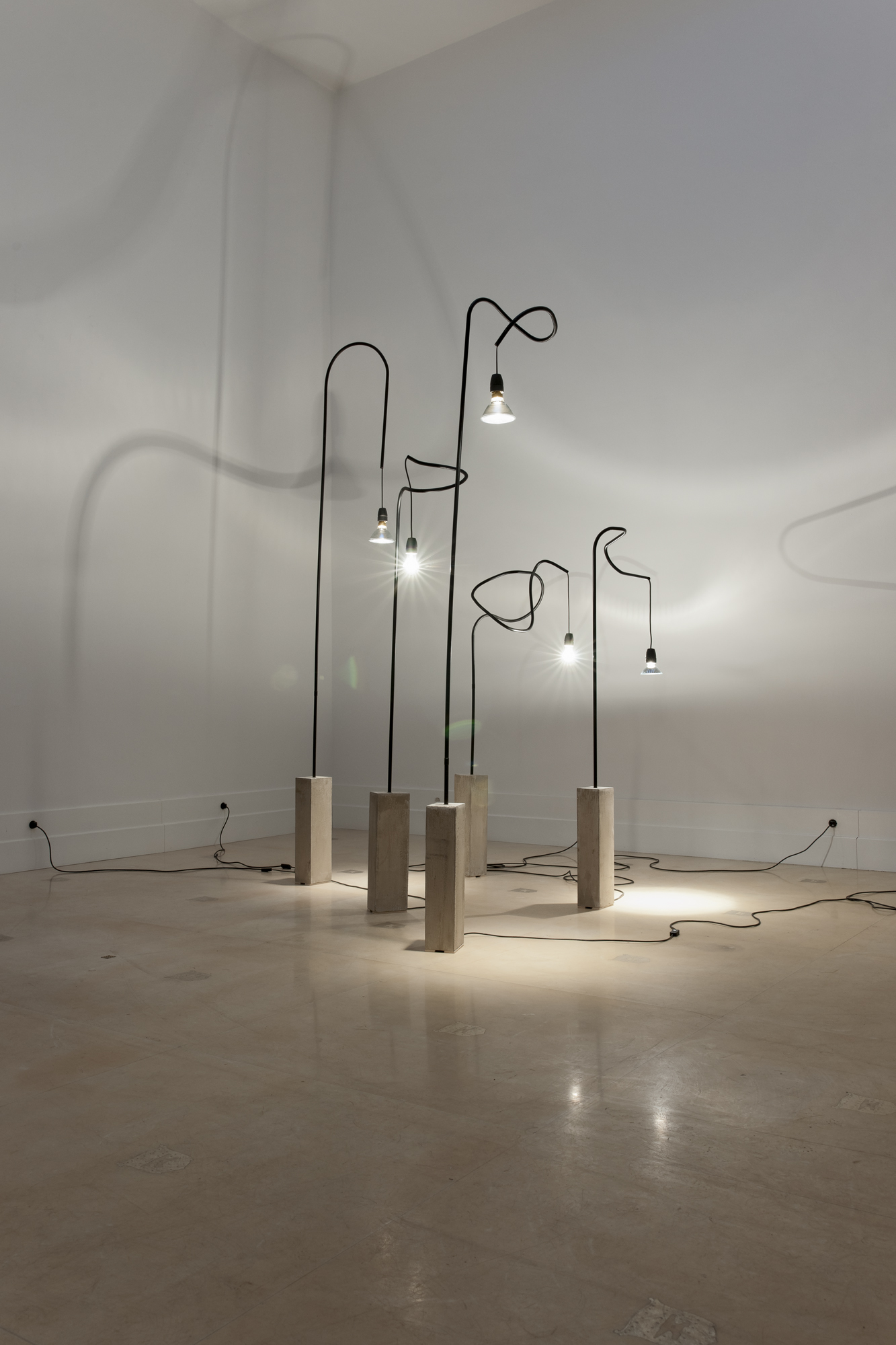 Chemistry characterizes solids as bodies, whose atoms are constrained in their mobility by a structural corset. Therefore, the grouping of the atomic building blocks at the micro level is responsible for the overall shape, the structural framework that in turn results from the ratio of forces which determine the arrangement of the individual parts.

The relationship between individual part and overall structure plays a crucial role in the work of Amélie Grözinger. This is due to the fact that her paper works are based on individual elements in the form of folded hexagons, which are stuck into each other in such a way – with the weave being stabilized with staples – that strands and patterns are created which finally are eventually woven together. As a result, relief-like surfaces, even geometric landscapes, are produced, the structure of which is determined by this single form, the hexagon, and its recurring copies.

Grözinger herself uses the concept of fractals to parse her work. In fractal theory, an object necessarily always is made of building blocks representing miniature versions and therefore copies of the overall object. But such an exacting attention to detail is not voindicated in Grözinger’s work. Upon thorough inspection, minimal deviations become apparent, like an imprecise fold, misaligned staples or an incorrect placement of hexagons.

Instead of being eradicated, for the artist these irregularities become a vital trait of the work and a characteristic representing of its intrinsic artistic value.

Ultimately the irregularities and mistakes constitute the opposite of what the analysis of organic solids under the microscope would bring to light. In the latter, the exact reproduction of the individual part is based on genetically encoded processes. But in Grözinger’s work, it is the process of folding as a manual task that gives each building block individuality, because the handling of each element is unique despite the regularity of the folding process.

As a consequence, varied mirrored works are created, described as "speculum", which vary not only in size but also in the composition of their surfaces. The consistency of the surface in turn determines the level of reflection, with Amélie Grözinger’s mirror ensembles tending to look less like reflected images and more like a kaleidoscopic play of points of light and shadowy edges.

It is perhaps this play with light accents that aroused the artist’s interest for items such as lamps in addition to mirrors. That being said, the connection with the mirrors in the exhibition "Imprints of Solid Matter" is subtler than in previous presentations in which the illumination body was also built from hexahedra. In the new work, they are replaced by regular light bulbs, which become 2 meter high floor lamps in connection with lacquered copper tubes on concrete pedestals.

The materials and the monumentality of the lamps insert a counterpoint to the textured weave and labor-intensive folding process, two components that might lead one to all too easily label  Grözinger’s technique as "women's work": In the face of this juxtaposition of materials and processes of form genesis, the exhibition focuses on issues other than female vs. male craft practices. Much more urgent are questions of geometry, of the feel and the formal properties of surfaces and solids, of the qualities of humble materials like paper or staples and the transformation of a material like champagne-label paper into a design element, whose shiny, precious-looking surface first is deconstructed by folding, then returned to its intended effect in combination with the hexagonal building blocks.

The fold, wrote the philosopher Gilles Deleuze, marks not a separation, but a distinction. And thus the exhibition ultimately revolves around the fold, whose specific aesthetic potential is moved to the center of attention in the compilation and comparison of the individual works, as is its structural variability and material stability.